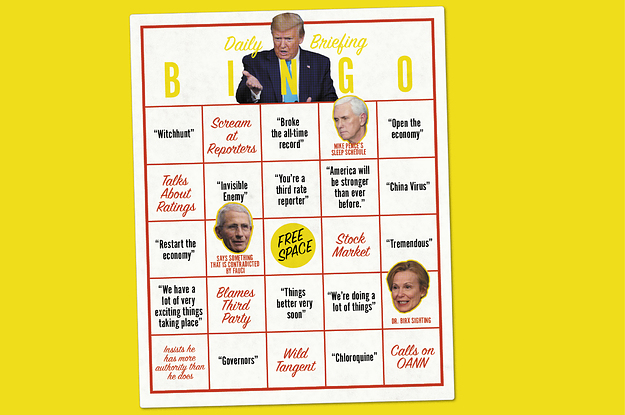 If you close your eyes and sit still for a few minutes, you can remember a time when things weren’t so strange — the daily flood of people dying alone, the fear of those forced to venture out, the millions who have lost their jobs, the fact that many, though far from all, of us are taking this in while sheltering at home, staring at the same four walls.

If you try this exercise around 5 p.m., however, you will be quickly shaken from your pre-coronavirus nostalgia. For that, give or take 45 minutes, is the witching hour. In addition to the myriad adjustments Americans have made to try to survive a deadly pandemic, they have also allowed Donald Trump into their homes on a nightly basis. No matter if he has an announcement or not, a message to the nation or not, there he is, riffing on whatever enters his mind. And there we are — millions of us — to take it in. It sets a rhythm to the day: breakfast, lunch, Trump press conference, drink, dinner, drink.

It’s obvious why Trump, obsessed with attention, has settled into the routine. The question is why we do this.

For journalists, it’s our job — and there’s a raging debate over the how and why of it. But millions of Americans are tuning in to watch the president splatter his id all over the White House briefing room. It’s exhausting. Last week, a stream of consciousness riff about reopening the US economy took him from talking about the fourth fiscal quarter to comparing the September 11 death toll to the coronavirus death toll (“we’ve more than doubled it and it’s still going”), then sideways into the stock market (“we’re going to have the best stock market week — shortened week — in 50 years, almost broke the all-time record”), around to airlines, into one of his favorite new lines (“we’ve learned a tremendous amount”) before ending, finally, with ventilators (“we have a lot of very exciting things taking place”).

The mental energy it takes to follow his train of thought, let alone suss out new or important information and flag the lies, is enormous. Since self-isolation has stripped away the romance of things, I’ll admit that sometimes, during particularly long sessions, I find myself falling asleep. As if my brain is saying, I can’t take this anymore.

Even Martha Joynt Kumar — the director of the White House Transition Project who has made it her life’s work to study presidents’ interactions with the press — calls the daily briefings “overwhelming.”

“I think at any time the president speaks, one needs to listen, because what he is saying forms the record of his presidency,” she said.

Despite growing calls for reporters to dismiss the briefings, it is hard to turn away when you have such unfettered insight into the mind of the most powerful person in the world — lies, insecurities, and all. One day, centuries from now, historians will read the White House record and find that in the midst of a global pandemic, Trump was delivering untested medical advice from the podium. They will see him calling reporters “fake” and “third-rate.”

Never before has a president seized the public White House podium nearly every single day for so long. Trump has spoken for more than 20 hours in the White House briefing room since the crisis began. Since regularly joining the task force briefings on March 13, there are only three days when he has not addressed the public. Several of his press conferences, including one on Friday that clocked in at two hours and 13 minutes, beat his previous “single-day record for talking to the press,” which came during a NATO press conference in London on Dec. 3 when he spoke to reporters for two hours and one minute — and even that one was spaced out in three sessions of Q&As, according to a study by Kumar. A red banner day came on March 24, when he held a Fox News town hall on the virus during the day, and then called into Fox to clarify his comments, and then decided to hold a previously unplanned briefing that evening, which ran for one hour and 50 minutes. For the 18 press conferences that Trump attended fully, rather than handing it over to the actual task force chief, Vice President Mike Pence, the average running time was 91 minutes.

“He needs one of two things — a group who loves him or a group who doesn’t like him, so he can get energy from either one of them,” Kumar said. No mass gatherings like public rallies? Cue increased attacks on reporters in the room. “These are different,” Kumar said. Trump is up there surrounded by experts who often contradict what he has just said, when he hasn’t contradicted himself. “It’s very confusing for people. Do we have to stay inside or don’t we? Is the president the one setting the tone or the governors and mayors?”

When the briefings first began, Trump had a message to deliver. After weeks of downplaying the crisis, he had to convey the seriousness to the nation, particularly to those Americans fed a diet of denialism for crucial weeks in late February and early March on Fox News. There was information to pass on — the ventilators are on their way, economic stimulus is on its way, testing is being broadened.

At first this task fell to Pence, head of the White House Coronavirus Task Force. He held a couple of briefings in early March and then Trump delivered his address to the nation on March 11, recognizing the severity of the crisis and broadly outlining (and flubbing) the government’s response. Two days later, the president took over the daily briefings, and has barely missed a day since.

By now we all know that Trump needs to be the center of attention, and to feed his ego in the absence of rallies. Where he once feasted on the adoration of arenas filled with thousands of people dressed in MAGA gear, he now stands in front of an increasingly sparse briefing room and tries to mimic the rush of feeling something. Instead of stoking the crowds to chant “Lock Her Up,” he needles and dismisses reporters with a smirk and a wave of the hand, most often women of color. As he does at the rallies, he reads from his notes and veers off script. The briefings have even stretched to fit the length of time he usually holds at rallies, and he has his chosen closing phrase, no longer that he will “keep America great” but that “America will be stronger than ever before.”

In her research, Kumar has noted that presidents deliver press conferences in similar fashion to how they campaign, and for Trump this means speaking to a sliver of the American public, rather than to the country at large. When he’s not attacking the media, he’s standing up there expecting them to praise him. “He sees himself as the host and the person that has to be welcoming and that presents something of an uplifting portrait to the public,” she said. “He’s frustrated in his dealings with the press because he thinks he’s doing a great job and he thinks their job is to be supportive, especially in a time of national crisis.”

None of this should be a surprise. In his seminal paper on narcissism published in 1970, Otto Kernberg lays out very clearly the characteristics of someone suffering from pathological narcissism. The patients he is seeing, he writes, “present an unusual degree of self-reference in their interactions with other people, a great need to be loved and admired by others, and a curious apparent contradiction between a very inflated concept of themselves and an inordinate need for tribute from others.” Check. “They experience little empathy for the feelings of others, they obtain very little enjoyment from life other than the tributes they receive from others or from their own grandiose fantasies, and they feel restless and bored when external glitter wears off and no new sources feed their self-regard.” White House briefing as glitter.

I have a friend named Fatima, who normally tries to keep her Trump intake to a minimum, who has not missed a briefing and created a bingo game to get through it. She started watching to hear from the White House’s medical experts, but soon it devolved. ”It became this kind of perverse game,” she said. There are squares for Trump’s favorite words — ”tremendous,” “invisible enemy,” “witchhunt” — and his favorite subjects — ”Mike Pence’s sleep schedule,” “things better very soon,” “insult reporter.” Someone wins quickly every time.

It is normal to feel unmoored — and to even find a strange degree of consistency in the scheduled viewing of Trump’s ravings, while experiencing disbelief at their content. The power of a narcissist like Trump is deflecting the blame onto others. If reporters only asked the right questions, everything would be okay. But is it any more absurd to ask the president whether he might pardon someone on the Netflix show “Tiger King,” or to ask him to deliver a message to the 16 million Americans who have lost their jobs in the past month? What could anyone, at this point, possibly expect him to say? (“Well, I think the economy is going to do very well. Now that’s just my feeling. It’s a strong feeling. I’ve had good, proper feelings about a lot of things over the years. And I think we’re going to do well.”)

There’s that Saul Bellow quote that fits here: “In an age of madness, to expect to be untouched by madness is a form of madness.”