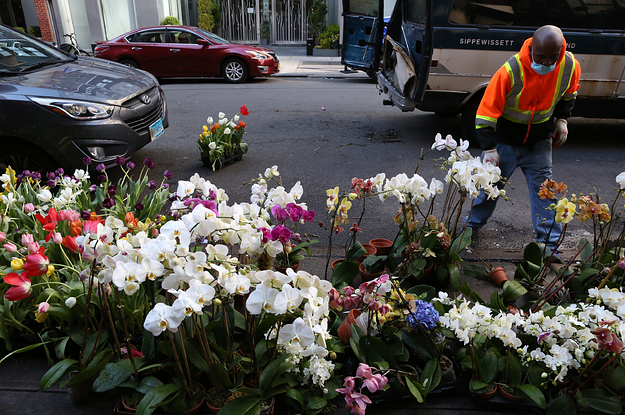 Like a lot of places, New York City is closed up and quiet, unsettlingly free of people and commerce.

That includes a block of Manhattan known as the flower district or flower market on West 28th Street.

On an overcast, routine Wednesday this week about when the morning market would begin closing up, the grates were already down, the windows mostly dark, the street empty, and the sidewalks free of the trees, plants, and flowers that would normally spill out of the 20 or so flower, plant, and specialty wholesalers and retailers located on this one block — a strange, romantic stretch of New York often written about.

“Most people have been forced to close their business,” owner Gary Page said in a recent interview. He’s been in the business since 1984, and come through Wall Street crises and 9/11.

Some on the block have launched online wholesale-to-trade business, take emailed and shipped orders for topiaries, or work in a limited capacity — but a lot of the business is done directly, and in service of events or rooms that are now empty for public health.

When Page’s business, G.Page Flowers, closed on March 21, they placed bouquets, wrapped in brown paper, on the sidewalk against the storefront’s green grate for passersby.

“Everyone does understand the situation that we’re in, and that we have to defeat the virus,” Page added. “That’s the first step.”

More than 10,000 people have died in the United States during the coronavirus pandemic — a staggering number that includes Eddy Marquez, who worked at US Evergreen in the district for decades, and reportedly passed away from complications earlier this week.

As the shutdowns continue to meet public health guidance, the economic situation across the country has become increasingly difficult. Untold numbers of small businesses are in bad circumstances; 16 million people have filed jobless claims in just three weeks — a population twice the size of New York City. The unprecedented freeze to half the world’s economy has externalized how interconnected and complicated local and global economies really are; you can’t stop or pause one part of life without affecting a multitude of people’s livelihoods.

The pandemic’s physical limitations first affected restaurants widely, but the reverberation of empty venues, canceled occasions, and people not going to work and school is staggering — including for the wholesale flowers and plants that would otherwise be sold to florists, event planners, landscapers, and people passing through. In Holland, growers have destroyed millions of flowers — there’s just not many places for them to go.

“Think about a bride’s wedding, right?” said Monique Blanco, the Operations and Accounts Manager for Foliage Garden, which specializes in plants. “She had to postpone it — it was supposed to be March 20, right?”

The kinds of flowers or plants won’t be the same when the bride’s wedding takes place, if she has it and if she can later afford the expense of flowers. Same with, for another example, the plants inside and outside the restaurants that nobody’s been inside for weeks.

“We’re in all these little niches that nobody really thinks about,” Blanco added. “But it’s thousands of people across the country that fulfill these jobs. So that for us is ever present in our minds.”

As Page explained, for flowers, the “grower has to pack stuff in boxes — so you have supplies of boxes, materials, stuff like this – then they transport them to auction or exporters, they’re then put onto airplanes.” Depending on the season, growers might be packing those flowers in the Netherlands, Ecuador, Colombia, Vietnam, Thailand, Malaysia, Australia, or New Zealand — or somewhere in the United States. “Those planes are flown over to JFK or trucked up to New York from Miami or from local growers.”

The market — which also now includes things like topiaries and orchids — dates back to a much earlier era of the city. A century ago, New York operated as one of the biggest merchant-manufacturing centers in the world, in one of the biggest natural harbors in the world, with well-known districts like the meatpacking or garment. Among these, populated especially by Greek-immigrant businesses, was the flower district in the same neighborhood — but in the 20th century, it spanned multiple blocks and dozens of businesses that have diminished over time. (“Where the hotel is now, all flowers. Where the McDonald’s is, all flowers. The Bank of America, all flowers,” as one florist put it to the Villager four years ago.) The transformation of the district’s Chelsea neighborhood from rough scene into the location of Google’s New York headquarters — as well as the zoning laws that have put a number of hotels in its midst— is often the story told about the flower district.

Still, Blanco noted, business was going well. Foliage Garden operates green houses on Long Island, which allows them success in a niche industry: plant rentals. Corporations like Chanel that put on events, small fashion houses, people working film sets and photo shoots, Instagram popups, or even for people just throwing weddings or birthday parties — they rent trees and greenery for the occasion, she said. But an increasing amount of their cash flow came from people walking down the “jungle utopia” of West 28th Street, and wanting to buy a plant here or there — basically the effect of millennial fervor for house plants translating in both corporate and individual ways.

“People were coming to realize the value of plants again.”

Until they can resume business, Foliage Garden had to lay off their shop staff — there’s just no money coming in, Blanco said — while their greenhouse team continues working at a reduced schedule to keep the plants alive. Page said he’s trying to avoid layoffs. “People have worked with me for so long, many people — I find that very difficult, I don’t want to do that. We’ll take a beating on it.” He’s hoping government relief efforts for small businesses come through.

Some of the current businesses are family operations; there are also multi-generational growers and multi-generational florists on either side of the chain. Blanco has known the owner of Foliage Garden, Maryann Finnegan, since she was 13; when Blanco graduated from college into the great recession, Finnegan told her to come work for her until she got settled. “So I did. And I never left.”

This time of year — when spring turns to summer and the bulk of their business takes place — is usually fun, she said, but people don’t always appreciate the complicated logistics of a business like this. “Like everything, we are New Yorkers, and we are a demanding people,” she joked. “So a plant is a plant, yes, but when you throw a New Yorker into anything, it’s going to get complicated.”

And it’s true that outside of the people who grow and sell them, nobody technically needs flowers or plants — not like food or lodging or, eventually, a haircut. It’s a luxury business, as Blanco allowed. But if you’ve experienced a quiet sad day with the unexpected pop of color or greenery, it’s hard to forget. And if you imagine all these events we’re not having and places we’re not going, without any ornamentation — even with the warm promise of reunion — they look a little dull and gray.

Page anticipates that there will be changes to the business, as there have been after major shocks, like 9/11 and the great recession. But people still want flowers in the end, he said; that doesn’t change.

“Flowers have tremendous power,” Page said, “especially if you give people flowers. People remember that.”

The last thing that health care professionals needed at this precise moment was flowers. But, he added, “hopefully, when we get through this, we will be able to say to these people, thank you so much.”