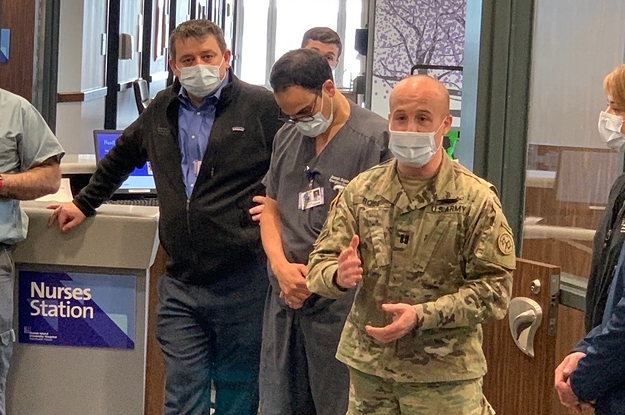 WASHINGTON — Rep. Max Rose of New York spent two weeks setting up an emergency hospital on Staten Island to help fight the coronavirus pandemic and if there’s a single thing that he took away from the experience it’s the idea that “this is war.”

Rose, a Captain in the National Guard, began voluntary reserve duty on April 1 and was deployed to the South Beach Hospital facility on Staten Island, where he oversaw logistical operations for a repurposed 252-bed facility for patients with COVID-19, the disease caused by the novel coronavirus.

When asked if he would compare the pandemic to war as President Donald Trump has during his daily press conferences, Rose told BuzzFeed News, “Absolutely.”

Rose, a veteran, earned a Bronze Star, a Combat Infantry Badge, and Purple Heart for his active-duty service in Afghanistan during 2012 and 2013. “I compare this to total war,” Rose said Thursday, adding that people on the ground are pleading with the president “to utilize all the tools at his disposal, to engage in the war and to win it.”

“Let me be very plain and simple here,” the Democrat continued. “Nothing would make me happier than to see this president as the commander-in-chief that he is, win this war — and if that means that he wins the election as well — so be it, so be it! You can’t think about politics right now.”

The five-story facility Rose worked on was converted from a never opened state psychiatric center to a pre- and post-COVID-19 intensive care unit at Northwell Health’s South Beach Hospital Facility on Staten Island. Within a week, the team created a functional emergency center which received its first 27 patients on April 7. They expect to admit a second round of COVID-19 patients on Thursday.

“I think about the people who I’ve met and got to know during these last couple of weeks,” Rose told BuzzFeed News who served alongside his old infantry unit — the 69th Infantry Regiment — during his two-week deployment. “Doctors whose own family members are sick, those who have lost family members and are still serving all day and all night fighting this war. People who haven’t seen their family member, haven’t hugged their kids in months because they’re self-quarantined because they don’t want to get their families sick. The least that we can give these people is the resources they need.”

Hospital administrators welcomed the freshman member of Congress and while he did not work with patients firsthand, they lauded his “brass tacks” approach to management. “You could tell he’d been in the military,” Dr. Brahim Ardolic, executive director of Staten Island University Hospital, told BuzzFeed News. “And for gosh sake, we opened a hospital in five days.”

The new facility will relieve the overflow from the only two Staten Island hospitals, including the nearby Northwell facility whose emergency unit is functioning at more than 3 times its capacity. Part of the refurbishing process required the operations team to hire staff, retrofit oxygen in each room and swap bedding that would be convenient for senior patients who are suffering from the disease.

Rose said this particular hospital is providing patients with iPads so that patients can FaceTime with family members, a problem many hospitals have struggled to address because of the disease’s contagion.

In New York City, there have been more than 10,000 deaths. Staten Island is considerably less densely populated than the city’s other boroughs; with a little more than 450,000 residents, the death rate hovered around 400 as of Tuesday while 8,298 residents have tested positive for COVID-19.

Hospital administrators also told BuzzFeed News the extra facility gives them room to schedule other important procedures that have been sidelined amid the current health crisis.

“I was just told about a patient that actually has a significant cancer in their stomach, that they’ve actually been delaying because it’s a very complicated procedure and they couldn’t do it,” Ardolic told BuzzFeed News during a phone interview. “He needs to get it done and there are probably thousands of people around the country just like this poor man.”

Rose also talked about the future as it relates to a pandemic and measures the country’s lawmakers should take to become better prepared.

“We got to be prepared to make sure to not let this happen again,” Rose said. “We have to have an infrastructure in place for a second surge and we got to have enough testing in place to prevent that second surge from occurring.”