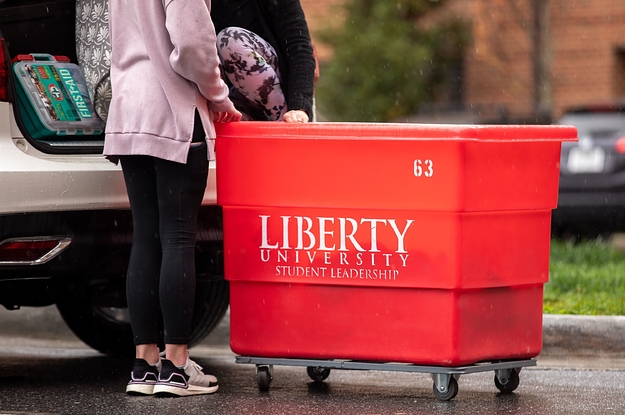 A student at Liberty University is suing the Christian school for refusing to refund thousands of dollars in campus services like housing and meals after students fled due to fears of the coronavirus, filing a class action lawsuit that alleges the Christian college is “in a very real sense profiting from the COVID-19 pandemic.”

Filed anonymously by Student A, who cited fear of retaliation if they were identified, the complaint in US District Court argues the Lynchburg, Virginia, university was “glacially slow” in responding to the pandemic and failed to pay back students for unused services during the spring semester.

President Jerry Falwell Jr., an ally of President Donald Trump who had downplayed the pandemic, has kept the university’s campus open, drawing criticism from state and local leaders.

Falwell called one parent a “dummy” on Twitter for criticizing the university’s response. After he had invited students to return after spring break, Falwell moved classes online in March amid growing criticism.

But the suit contends Falwell kept the parts of the campus open so he could retain fees for student housing, meals, health plans, and more — even though most students had left campus, college sports facilities were shut down, and meals were only available for take-out. Because the lawsuit is a class-action on behalf of similarly situated individuals, other students could receive money from a ruling in their favor.

“The university’s statement that it is ‘open’ is an illusion being put forth to try to keep money that should be returned to students and their families,” says the complaint, adding that annual dining plans start at $3,780; housing begins at $4,750; and other fees, from medical care to activity centers, add thousands more.

Liberty University sent a statement to BuzzFeed News that says the allegations are“without legal merit,” adding that the school had “taken into account the economic impact and legal rights of all the parties involved.”

Describing his decision to switch to online classes, Fallwell told Liberty News, a campus media outlet, “We’re really not operating as a university, except online,” adding that the campus was functioning as a “sort of a housing complex, with restaurants doing takeout.”

Liberty News added that “by keeping the residence halls open, the university is able to accommodate all the international students unable to return home, as well.”

BuzzFeed News reported on several students in late March who were abandoning campus and afraid to return. Clayton Didinsky, a 22-year-old junior, said on March 26 that the school had given “mixed messaging and I honestly think it’s a way to keep students’ money.”

“I don’t think Jerry is worried about students,” he added. “I think it’s about money because what other reason do they have to keep residential students on campus. There’s caution tape around most things and there’s not much to do.”

Returning students were offered a $1,000 credit for the fall semester, but the lawsuit argues not all students will be eligible, and the credit is “a mere fraction” of what they should get.

“Liberty has refused to refund students and their families unused portions of the fees they paid,” the lawsuit adds. “Liberty’s decision to tell its students that they could remain on campus to continue to use their housing, meal plans, parking, and the benefits of the services and activities for which their fees paid, was not only illusory and empty — because there were no more on-campus classes — but it was also extremely dangerous and irresponsible”